In recent years many Canadian bands and artists have been shining on the worldwide stage allowing live music in Canada to make a growing contribution to Canada’s economy, and based on data collected and analyzed by SOCAN (the Society of Composers, Authors and Music Publishers of Canada) the trend is likely to continue.

“We analyzed revenues generated from live music performances, and we’re pleased to report that our members are continuing to gain more than ever from concerts,” said Jennifer Brown, vice president, Licensing at SOCAN. “We’ve seen year-over-year growth in 2012 of 14 per cent in concert revenue, helped by major artists playing the Canadian circuit.”

Due to internet sharing the revenues from sound recordings have been declining for some time, but the income streams flowing to musicians and publishers from performing rights (TV, Cable, radio, live shows etc.) has continued to grow.

In 2012, SOCAN distributions from concerts and live entertainment totaled $20.9-million. Growth in revenues has been steady for the last couple of years, as music creators increasingly rely on live performances as a revenue source. 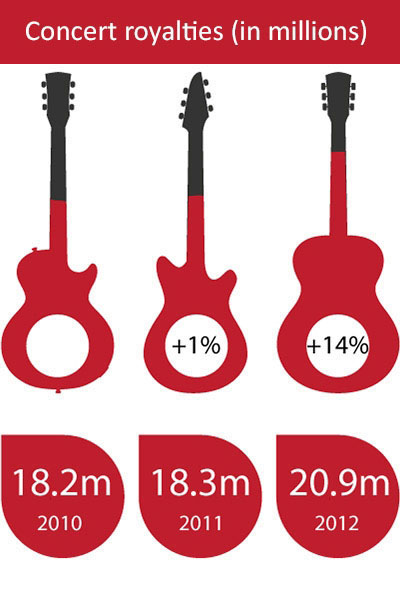 “As a performing songwriter, concerts and live performance are essential to my livelihood,” said Ian D’Sa, songwriter, guitarist and singer with the Canadian band, Billy Talent. “It’s great data that supports what I have suspected: that there is more live music in more places at more times than perhaps ever before in Canada.”

With more venues opening almost daily across the country and concert promoters working harder than ever to book shows the stream of concert revenues isn’t likely to dry up any time soon.

Live entertainment is a huge part of the Canadian economy and affects more businesses than just those directly associated with event.  Jobs created at local restaurants and even the guy at the over priced parking lot close to the venue are an essential parts of keeping Canadians employed.

While not all shows are Canadian acts the employment created at these events is Canadian.   Going to enjoy a concert is a great way to treat yourself to a night out and as an added bonus helps support local employment.