Recently, I got to interview skiing legend and Crazy Canuck team member Dave Irwin, during a book singing in Alberta for author Janet Love Morrison’s biopic entitled “The Crazy Canucks“. I got to find out a little more about this living legend, his illustrious skiing career and his thoughts on Morrison’s book about a group of Canadian skiers that defied and changed the view of Canadian Skiers competing in the European sport of Skiing. 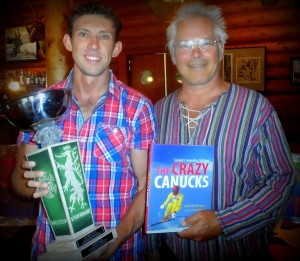 Dave has had a celebrated career and has made his way into Canadian Sports History. Described as “one of the greatest skiers Canada has ever produced”, Dave at his prime was one of the fastest downhill skiers in the world. He represented Canada in 2 Winter Olympic Games and won a World Cup. 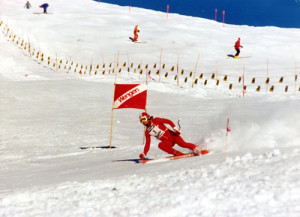 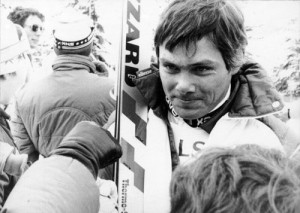 What insight can reader’s look forward to learning when reading Morrison’s book about these fearless Canadian men?

Janet’s book hones in on the Crazy Canucks, a group of young Canadian Skiers that together challenged the world, to show the Europeans (at their own sport) that we were a group of Canadian male skiers that were in fact very good and for the first time could compete and challenge the revered European Skiers like never before. The Canadian women had done this but never the Guys. And with the notion that Canada could be a world contender, the group set off with the mindset of

Dave ads that each Crazy Canuck member was an individual and outstanding competitor but as a team “we were unbeatable.”

Readers should pickup a copy of the “Crazy Canucks” as the book is part of Canadian history and for skiers it is especially important to know and relate to personally.

As a skier, it is part of you, still today.

Where did the origin of the name “crazy Canucks” or “kamikaze Canadians” stem from and what did it personally mean to you, to be part of this group?

Dave explained that the term “Crazy Canucks” was not coined until Wengen in Switzerland a few months after Val D’Isere, France when one of the Canucks, Ken Read was announced as the first ever North American male to win a World Cup Downhill race.

“Serge Lang of World Cup Media Fame and Organization Starter came up with the term after my race at the Wengen World Cup Downhill. I was approaching the short steep drop and ‘S’ turns into the finish when I slid out on an icy turn and somewhat crashed into a fence before continuing on, narrowly missing a cameraman and still crossed the finish line.  Serge, a big burly man looked down at me waiving his finger and said ‘Crazy Canuck’”.

“Later that afternoon while inspecting the downhill I called up a Toronto Lawyer to reserve the name “Crazy Canuck” with 4 owners. I told the other’s it’s a great name and the media picked up on it as well. 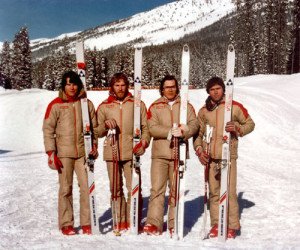 “Being part of the group was amazing. We were all team mates with our expenses paid for by the Canadian Taxpayer. (Thanks Canada, Dave adds). During this period our lives were all fairly crazy but were equally wonderful.”

What was it about the group that created a new found respect for Canadian Skiers in a world and sporting discipline mainly dominated by European’s in the late 1970’s and what did it feel like once the Crazy Canucks had started gaining more support and attention from fans across Europe?

“Historically, I am just now finding out how much of a World Challenger we really were. As a group were a TEAM, A Canadian Team, A ski team, a group of professionals. Thanks to CBC-TV, Canada had a chance to see us each week (after a few years away) in Europe and what an impact on that small but turned on group of Canadian Viewers” we had. “It was great to see what we had done at that time to Canadian viewers and the amount of ski shops, media stations, supporters homes, ski shows, ski resorts, events and interviews that we were invited to across Canada” was phenomenal. “We made a Canadian Impact”.

Did you feel at that stage that you had broken the many stereotypes and mindsets out there about a group of Canadians being able to step onto European turf, dominate and beat them at their own game?

“We were quite good at the time compared to the world’s competition but now a decade later Canada is again doing as we should.  Skiing in Canada is still not as watched as hockey but in the Crazy Canucks era it was comparable and an honour to be part of the Canadian story as it never was before. A story, History, A legend, Something we can all be proud of”.

What is your most memorable moment during your Alpine Skiing Career?

Schladming, Austria in December 21, 1975 where I won the downhill event. There were a few different moments experienced on that day.

With such a busy career and outstanding ski history, I am sure you must have many stories to share. Have you thought about releasing any books or autobiographies of your own?

Yes, of course but about my skiing and my personal story, told by me. Not yet.

In 2004 there was a movie released which focused on the group the Crazy Canucks. What was it like personally for you to have a movie done in honour of the group and see your life/career being played out on screen?

Yes, there have been many stories, a movie and a book. None of the TV stories or Movies was my story though.They are all great and different to my story. Never a feature movie released either, so who knows … that would be something.

You could be dubbed the “Come back kid”. After sustaining a head injury in Wengen in 1976, it was only 2 weeks later that you were back out there training with the team. That is remarkable…. What was it that propelled you to continue and push on despite such an injury?

All the Crazy Canucks team members had injuries, so in a sense we were all come back kids.

I sustained 3 major injuries during my career:

1st Head injury was weeks before the Innsbruck Olympics

2nd Head Injury was weeks before the Lake Placid Olympics

“All we could do was push on. At that age, what else was there to do that would be as great? You might as well get up and try again. Three severe head injuries and I am still alive. Life is only what you make of it”.

Dave’s advice for young minded skiers out there who aim for the peaks and to dominate the slopes:

“Bend the knees and don’t hit the trees” (He Jokes).

You later established the Dave Irwin Foundation for Brain Injury. What is the primary role of your foundation and what do you hope to achieve through it?

My 3rd severe head injury in March 2001 put me in a coma for 3 days following a training run for an Export A Skier-Cross event.

Headlines across Canada and abroad reported on the crash: “Hoping for a miracle;” “Irwin fights for life;” “Crazy Canuck on life support.”

“Dave’s remarkable survival and on-going recovery from a severe brain injury are attributed to an indomitable spirit, will to live, and will to compete”

After my recovery, I came up with the idea to create the foundation.

“The foundation was to provide benefits to brain injury survivors and their families, for funding of academic research and innovative outreach programs and services which increase accessibility to persons in recovery and to provide some Canadian understanding for the severity and frequency of head injuries and realize it is just another injury. The Foundation supports educational programs to further raise public awareness of acquired brain injury”.

Dave still ski’s today but not as much as he used to.

Dave is a certified level 3 instructor. He has never asked for his level 4 although he is a level 4 examiner. For 3 years he was in charge of the Ski School at Sunshine Village but eventually moved on.  Working at the Ski School was a morning job and my other job as Director of Marketing at Sunshine Village was a full day – night job. Eventually, I decided I wasn’t going to work myself 24 hrs a day and had to make some changes.

Since Dave’s career on the slopes, he has moved into a different direction and that of the souvenir and promotional apparel industry.

Dave formed the company Mountain Image, which started during his time spent at Sunshine Village Marketing. He realized that the promotional products industry needed to be better and could end up being huge and so with that he went with his gut.

Dave, who has retired from the slopes and limelight, now lives in the picturesque mountain town of Canmore, Alberta.

To fully understand the impact that such a group of skiers made and how they worked to redefine sporting history and Canada’s involvement in a predominantly European dominated sport, pickup a copy of Janet Love Morrison’s book – “Crazy Canucks”.