Deep in the jungles of Indonesia, a lone man braves months of rain, heat, and predators as he slashes through the brush one day at a time, trusting his machete will lead him to a gold deposit so abundant that his riches surpass even his most elaborate imaginings.

On December 13th of that year: at long last:  a glint.  A glimmer.  Gold.  Michael De Guzman quickly prepares a core sample and sends it for analysis on behalf of a tiny Canadian company named Bre-X, then owned by Calgarian David Walsh.

The results, which were verified by a series of independent analysts, confirmed De Guzman’s wildest dreams had finally been realized: millions of ounces of gold would make him one of the wealthiest individuals in the world.  De Guzman quickly sends his findings to John Felderhof, Vice-President of Exploration for Bre-X.   Though presented with far too much excitement and far too little concrete data, CEO David Walsh is convinced, and immediately purchases a swath of land called the Busang, a region home to the Bombalai volcano, the only volcanic zone in Borneo, the world’s third largest island.

Gold is often discovered interlaced throughout ancient and mineral-rich volcanic floes.  When Bombalai was an active volcano thousands of years ago, it expelled plenitude of minerals so rich that rain forests once covered the entire island surface.

Though volcanically dormant for thousands of years, the Bre-X discovery at Bombalai’s base sent company stock prices into an explosive eruption.  Virtually overnight, company shares went from pennies to $280 per share.  With the influx of new investment money, De Guzman clears acres of forest, bringing in the machinery to support one of the largest mineral extraction efforts in history.

Bay Street ignited, and the media spread the fire like wind over dry grass.  Everybody wanted inclusion, from top-floor executives, to white-collar professionals, to blue-collar workers, and even pension-poor retirees looking for a means to offset their medical costs

In one instant, a flashing golden glint–a nanosecond glimmer in the periphery of his perception–Michael De Guzman’s wishes were fulfilled, simultaneously brightening the financial outlook for investors around the world. Some even invested their entire life’s savings. 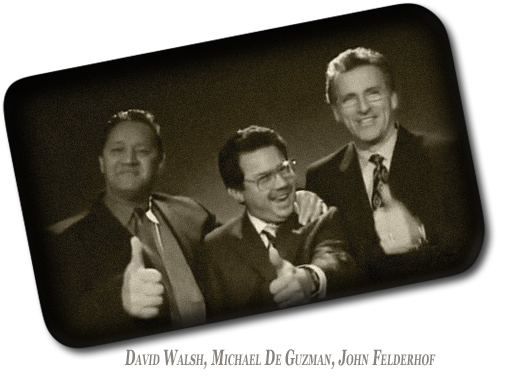 The Indonesian government decided that it wanted a controlling interest in the Busang deposit, and Bre-X was forced to accept a third part mining partner who took control over 55% of the region’s operations.  For De Guzman, the jig was up.  It would not be long before his secret was revealed.

Michael De Guzman’s life abruptly ended in a fall from a helicopter.  His body, concealed by the dense Indonesian forest, had already disintegrated into the surrounding ecosystem in the bellies of scavenging beasts, carrying De Guzman’s dream of being a wealthy gold prospector with them.

What shocked and horrified Bre-X investors, though, was that De Guzman’s gold had vanished with him. As it was soon discovered, the glint of gold that started it all had never flashed through his eyes, but only through his imagination.  There was no gold at Busang.  The entire operation–and Bre-X itself–had virtually zero mineral assets to back their investments.

The fraud had materialized in the mind of a lonely, frustrated, struggling forest prospector. Not finding the gold deposits of his dreams, Michael De Guzman instead concocted a master plan.  Adapting an age-old technique called “salting”, De Guzman used shavings from his wedding ring to add tiny pieces of gold to the core samples he sent away for testing.

A trained geologist himself, De Guzman knew exactly the right amount of gold shavings to “salt” into sandy core samples to create the appearance of a major deposit without raising any eyebrows.  Before long, his wedding ring had worn away, and De Guzman started purchasing gold from stream-panning operations along the Busang river.

“Salting” his core samples in this way, Michael De Guzman realized his life’s dreams not by discovering gold, but by carefully manufacturing the perception of its discovery.  He had fooled Bre-X Calgary headquarters; he had fooled hundreds of auditors and regulators, and he had fooled countless investors all over the world.  No longer imagining himself a millionaire, De Guzman devised an imaginative way live–and die–as one.

Michael De Guzman’s scheme would come at great cost to the world.  As the fraud rapidly unwound from its spool, its lashing claimed people’s savings, people’s retirements, and even people’s lives: some were so devastated that they committed suicide. Professing himself an innocent victim, Bre-X CEO David Walsh died in 1998 of a brain aneurysm.  Was he complicit?  A conspirator?  Or plainly duped like the rest of us?

After 16 years of mishandled or underfunded investigations, litigations over what’s been called “the biggest fraud in Canadian history” are sputtering out like an old lawn mower.  Litigators are giving up, citing the futility of pursuing an unwinnable case.

Former Bre-X executives, whether complicit culprits or complacent victims, as well as the banks and other companies involved in the scandal, are soon to be off the hook.  The bankruptcy trustee tasked with recovering the investment dollars of Bre-X shareholders, says it has run out of resources to continue the effort.

Deliotte & Touche Inc., who once held their torch high demanding justice for Bre-X investors, filed its intention to settle at the Alberta Court of the Queen’s Bench this year.  A class-action suit on behalf of Ontario shareholders has also run out of steam, and will likely drop its case along with the trustees.

“That’s pretty much it.”

In total, a $5.5-million settlement was distributed among the 44,000 people who had applied.  That’s $118 each, or a couple of tanks of gas, depending on what you drive.  It is less than one tenth of the price of gold per ounce at the time of this writing.

Throughout the 16-year litigation, Deliotte & Touche collected $3.9-million in fees and paid its lawyers $8-million, which arguably makes lawyers the biggest winners in a scandal that cost the world $6-billion in lost investments.

The only criminal charges ever filed were brought to Bre-X Vice President John Felderhof,  the man who sold the De Guzman scam to David Walsh, and consequently to the rest of the world.  The insider-trading charges, which were flimsy to begin with, ended with an acquittal.  Felderhof, after pocketing $75-million off-loading company shares in the two years prior to De Guzman’s death, moved into a lavish Cayman Islands home, where he lived a life of luxury — at least for a time.

Felderhof’s defence attorney, Joe Groia, was found guilty of professional misconduct by the Law Society of Upper Canada, a private legal watchdog firm, penalizing him with a $247,000 fine and a two month suspension for his “uncivil conduct” defending Felderhof.

Mysteriously, court documents indicate those Felderhof’s funds have mysteriously vanished.  According to trustees, he longer has “any substantial assets,”.  Felderhof himself, now 72, lives in a small house in the Philippines, and spends his days gardening.  What happened to his $75-million remains an unsolved mystery.

Did Michael De Guzman really “fall” from a helicopter?  Was it suicide?  Murder?  Or did he fake his own death? Many believe him to be still alive, and still concealing the immense, fraudulently earned riches he had accumulated. That too remains a mystery.

“What has the trustee got to show for 16 years of litigation? Almost nothing. Biggest fraud in Canadian history and no accountability. It’s very sad.”

While his outrage is laudable, some would say that zero accountability in the face of fraud is just business as usual. Moreover, is the Bre-X fraud really the biggest in Canadian history?  Or was the trophy for largest Canadian Fraud earned by the Government in Canada, as it secretly transferred C$114-billion of public funds to private banks in 2008?