MONTREAL- Fondation Émergence is launching  a new campaign to denounce the law against homosexual propaganda adopted by Russia in June 2013.

The international campaign will be published today and will remain active until the end of the Winter Olympic Games, which will take place in Sochi from February 7 to February 23, 2014. The campaign denounces Russia’s anti-gay law by combining a stylistic imitation of the logo of the Olympic Games in Sochi with an act that could be sanctioned by the Russian law and that is already the target of discrimination: a public kiss between people of the same sex. In doing so, Fondation Émergence hopes to attract public attention to this law and promote fair treatment for lesbian, gay, bisexual and transgender (LGBT) people.

“If our images may amuse some people, they can also destabilize others,” says Martine Roy, President of Fondation Émergence. “Through them, we want to communicate that everyday gestures between people of the same sex are not to be prohibited. They are not propaganda, and they deserve the same acceptance that heterosexuals are afforded.”

The ambiguous wording of the Russian law could make it applicable to a variety of situations and encourage homophobic acts. It specifically prohibits the promotion of homosexuality and dissemination of information on homosexuality among minors. Denounced by the UN’s Office of High Commissioner for Human Rights, this law is loaded with heterosexism and homophobia, and it violates human rights. It also goes against the Fundamental Principles of Olympism. “It has no place in a country preparing to host the world at the Olympic Games, or in any other country,” says Ms. Roy.

Proposed in a male and female variation, the campaign includes two printed posters, two digital posters and two stickers. The absence of a slogan makes it accessible, worldwide. Fondation Émergence invites the public to order and download the material by visiting www.fondationemergence.org, and to share it on social networks, in schools and in workplaces. More information on the Russian law, and the international reactions to it, is available on the Fondation Émergence website. 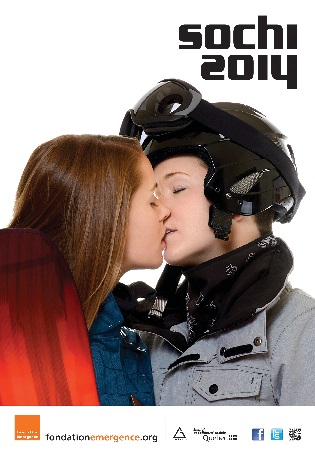 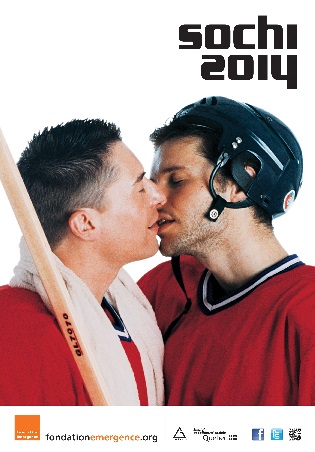