London, England – Shell has become the first of the major oil companies to develop a lead-free replacement for Aviation Gasoline (Avgas 100 and 100LL).  The new fuel, which will now begin a strict regulatory approvals process is hoped to replace Avgas (commonly used by light aircraft and helicopters), one of the last common transportation fuels to contain lead.   Shell’s new lead-free formulation comes after 10 years of R&D, as well as successful initial testing, carried out in the last two months by two original equipment manufacturers (OEMs).

Xinsheng (Sheng) Zhang, Vice-President of Shell Aviation, said: “We are proud of this first for Shell Aviation. This advanced product is the latest milestone in our long history of innovation. We believe that with industry support, a stringent approvals process can be completed for this new lead-free product within a short time-frame. We look forward to working alongside our technical partners and authorities to progress the necessary approvals needed to make this product a reality for use in light aircraft engines of all types.” 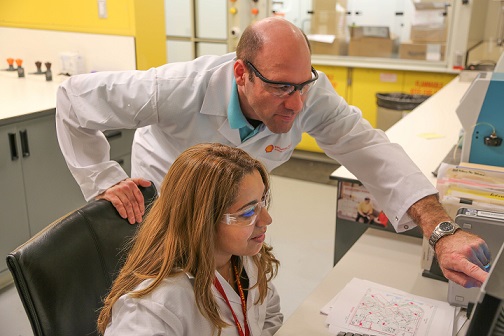 Avgas currently includes lead in its formulation to meet fuel specifications and boost combustion performance (known as Motor Octane rating). Shell has developed an unleaded Avgas that meets all key Avgas properties and that has a Motor Octane rating of over 100, an industry standard. The development of a technically and commercially-viable unleaded Avgas that meets these criteria has been seen by the aviation industry as a significant challenge, due to the tight specifications and strict flight safety standards that it has to adhere to.

To get to this stage, Shell Aviation technologists carried out an intensive internal laboratory programme, including in-house altitude rig and engine testing. Working alliances were then formed with aviation engine manufacturer Lycoming Engines (Lycoming) and the light aircraft manufacturer Piper Aircraft Inc. (Piper). As a result, the formulation was successfully evaluated in industry laboratory engine (bench) tests by Lycoming and in a flight test by Piper.

“Lycoming Engines commends Shell on launching its unleaded Avgas initiative,” states Michael Kraft, Senior Vice-President and General Manager of Lycoming Engines. “They engaged Lycoming to test their fuel on our highest octane demand engine and we can confirm that it’s remarkably close to Avgas 100LL from a performance perspective. This initiative is a major step in the right direction for general aviation.”

“Piper Aircraft is pleased to participate with Shell and Lycoming in this feasibility flight test programme,” said Piper Vice-President of Engineering Jack Mill. “Recently, we successfully flew an experimental non-production Piper Saratoga with Shell’s new formulation for about an hour. We appreciate the opportunity to work with Shell and Lycoming in this preliminary investigation of the technologies, which could in several years lead to flying unleaded fuel in our production airplanes.”

Shell will now engage the aviation industry, regulators and authorities, including the US Federal Aviation Administration, American Society for Testing and Materials (ASTM) and European Aviation Safety Agency (EASA) to achieve approvals for the unleaded Avgas. Shell expects to also work with other OEMs to continue the testing and refinement program as the approvals process progresses.