The Golden Sound Festival played out this Saturday 7th September in the small picturesque Rocky mountain town of Golden in British Columbia.

The festival organized by the Golden Sound Festival Society aims to promote arts and music festivals and showcase the very best of local and national artists in Kicking Horse Country and Golden and aims to grow tourism in the area through increased awareness of the arts and music scene. This is the first time for a festival of this nature to be hosted in the area.

Although the festival was forced to change venues last minute due to logistical problems with a previous location, the festival certainly did not leave eager music fans and enthusiastic individuals disappointed. The festival switched it’s location to downtown Golden with The Golden Youth Center, Golden Taps Pub, Rockwater Grill & Bar & Riverhouse Tavern, stepping in and setting the stage for top notch artists and musicians to blow fans away.

The level of talent showcased on the night was simply phenomenal with such a diverse and different group of musicians, bands and artists taking to the stage and truly reflecting the multi-cultural, melting musical pot of Canadian artists.

It was a night of sensory overload and rhythmic beats downtown.

One artist, who certainly grabbed the crowd’s attention and mine, was that of Kytami. 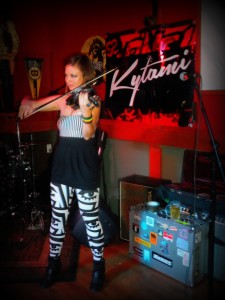 Her performance was nothing more than Electrifying. Dubbed the “violinist extremist” and a “music revolutionary”, this violin diva is a force to be reckoned with, when she takes to the stage, whips out her bow and entrances you with her melodic sounds. “Kytami is internationally renowned for one thing: she rocks the fiddle like a woman possessed.” 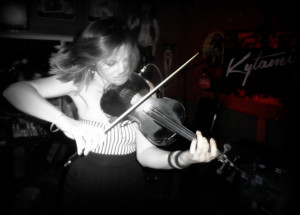 Kytami has reinvented and given a new twist to classical music with her mix of electronic, dub-step, synthetic, hip-hop and fiddle playing and created a style of her own that has captured the attention and musical souls of young and old, leading her to be called one of Canada’s most diverse and original fiddle players.

Kyla LeBlanc aka “Kytami” (a fusion of her first and middle name) is a fellow Vancouverite currently residing in Victoria, Vancouver Island. The Japanese sounding name is also credence to her Canadian, Japanese background. Kyla started taking lessons at the age of 3 but trained musically at the Vancouver Academy of Music until the age of 17. Later she started playing in a band at the Dubh Linn Gate Pub in Whistler, before moving back to Vancouver where she helped found the group Delhi 2 Dublin. In 2010 she moved onward to pursue a solo single career and is currently touring around Canada and the USA on her summer tour promoting her music.

Visit the official site to see more on the local talent featured at this year’s Sound of Golden Music Festival.

Judging by this year’s line-up, the festival and musical rainbow can only leave a pot of golden talent going forward.