The truth is, nobody actually knows the answer to the question, “Who said Knock on Wood First?”. There are so many origin stories floating around out there it is actually tough to pinpoint exactly when the phrase was formed.

What we do know is that the actual phrase ‘knock on wood’ did not actually enter common English usage, at least in North America, until 1905. It arrived in British English, albeit in the slightly different form of ‘ touch wood’ in 1899. However, this was not the time when people started to touch wood for good luck. It actually started way before this. I am going to cover a few of the theories on this page, but do not think of this as some ‘definitive’ guide. Instead, think of it as tossing around a few likely ideas as to how this term came into usage.
The vast majority of Pagan cultures around the world (of course, Paganism is dying off now), believed that ancient spirits lived in trees. In fact, if you look at rituals from around that time, you will see that many of the rituals related to Paganism at that time referred to these ‘nature spirits’. Many of these rituals involved knocking on the wood to awaken the spirit. The Irish were well-known for this. They believed that knocking on the trees was a way of thanking leprechauns.

It is this nature spirit belief that I want to hang on to a little. Now, back in those days, if you had a decent streak of good luck then you would knock the tree. You would be saying thank you to the spirits that reside within for your luck. The belief was that if you did not say thank you for the luck, then you would most likely end up angering the spirits who would then cause you bad luck. 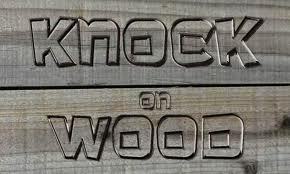 That is the Paganism belief. Of course, Christianity borrows a few beliefs from Paganism and, as you can probably guess, they have their own theory as to how the idea of knocking on wood began. Christ was, of course, executed on a wooden cross. As a result, the Christians believe that knocking on wood invokes the protection of Christ (basically).

The Jewish have their own theory too! This is a bit later than those other theories though as it comes from the Spanish Inquisition. The Jewish people wished to escape the wrath of the Spanish at the time. They, therefore, devised their own ‘knocking’ pattern on wood so they could identify each other as Jewish. This resulted in lives being saved which is, of course, incredibly lucky.

But, of course, we do not know the actual origin of the actual phrase (just where the idea of touching wood brings luck). There is some belief that it comes from a game played in Britain in the early 1800s. There was a game called ‘Tiggy-touch-wood’ where if you were touching wood, you could not be ‘tagged’. The word ‘touch wood’ was used at this time, so it probably stems from this to some extent.

Did I miss an origin story you have heard?  Let us know in the comments below!