VAUGHAN, ON – Construction of the twin tunnels is complete for the Toronto-York Spadina Subway Extension. The final segment of tunnelling was finished when tunnel boring machine (TBM) “Torkie” broke through the headwall at the Vaughan Metropolitan Centre Station site, finishing the tenth and final tunnel drive for the project. This sets the stage for the next phase of work in the tunnels including installation of inverts and walkways, track, traction power, signals and communications systems.
TBMs “Holey”, “Moley”, “Yorkie” and “Torkie” have bored 6.4 kilometres of twin tunnels for the TYSSE project. In the summer of 2011, the first TBM “Holey” began boring from a launch shaft at the Downsview Park Station site.

The TYSSE is an 8.6-kilometre extension of the Toronto Transit Commission’s (TTC) Yonge-University-Spadina subway line from its present terminus at Sheppard West Station (currently called Downsview Station) to the Vaughan Metropolitan Centre at Highway 7 in York Region. Construction work is expected to be completed by fall 2016 and has already generated thousands of jobs. Once the subway extension is completed, it will have six new subway stations and three new commuter parking lots.

The TYSSE will improve transit service by supporting a reliable multi-modal transportation network that is integrated with other transit systems within the Greater Toronto and Hamilton Area. This initiative will promote economic growth, reduce greenhouse gas emissions by helping take cars off the road, and reduce travel times for commuters.

For more information about the TYSSE project, visit www.spadina.ttc.ca. Select the “Tunnelling” tab for details about the twin tunnels. 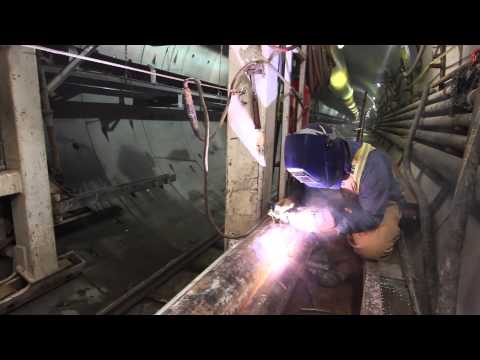