I’ve got nothing against elfin folk. They’re cheap to house and feed — you can get about fifty of the wee fellas in a candy box and a carton of Cheerios lasts them a month. Granted, they can be mischievous. One of them tied the laces of my sneakers together last week and I went ass over elbow down the grotto stairs. I would laugh louder but I don’t want to risk busting my stitches.

I have to face up to facts. With 9 billion Christmas presents to cobble together and deliver in one night, they’re really not up to the task. One swipe of an elf’s hammer contains less energy than a reindeer fart, it takes 200 of them working in shifts round the clock to make a single teddy bear and they need a lie down every twenty minutes. That’s less productive than a longshoreman for heaven’s sake. It’s a worry.

Let’s face it, they’re not the best choice for workshop labourers. They’re as hopeless as fairies for heavy lifting and although goblins wouldn’t be hard to recruit, those little monsters would pull the beard clean off your face just for the hell of it.

Frankly, there are better candidates. And this year might be the year to let the elves go back to their elfin condos and employ creatures better up to the task.

Like hobgoblins for instance. Though hobgoblins are not without their issues. According to Wikipedia, these small, hairy little men do odd jobs around the house while families slumber. Such chores are typically small deeds, like dusting and ironing (Apparently they won’t do vacuum cleaning or laundry in case they wake somebody up).

On the down side, Wikipedia says, they get snarky if you expect them to wear clothes. So I might have to ditch my idea of a uniform comprising baseball cap, sneakers and coveralls unless I want to risk them making a horse’s arse out of my 65″ waist. Seems they work for food though, so I guess I’ll just offer them a year’s worth of all-you-can-eat coupons for their nearest Taco Bell and we are sorted for 2015! Unless they can’t understand English and just eat the vouchers.

I do worry that they might get so out of hand I’ll need a high voltage taser to keep them in line (I only needed to tut at the elves and they burst into tears). On the other hand they’d be useful when I get sassed by ingrates and malcontents as I deliver my Yuletide wares. Like that time in Quebec when that lumberjack shouted at me. “I don’t care who you are fatso! Get your reindeer off my roof!” I mean that was uncalled for.

Wikipedia’s adds that hobgoblins are fond of practical jokes. This too could be a problem. When you’ve got 8 million candy canes to knock out, you could do without waking from a nap to find your whiskers superglued to Rudolph’s butt.

Wikipedia finally informs me that, “Hobgoblins are easily annoyed”. Well, fine. So long as I stay away from the relative merits of Wayne Gretzky versus Bobby Orr just in case the hobgoblins have come down on Bobby’s side, with luck they’ll not pull my nose off. 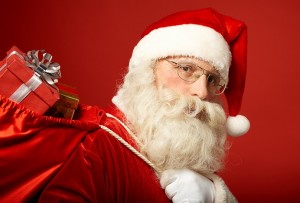