REXTON, NB – “Shots have been fired,” reported APTN correspondent Ossie Michelin, live via cellular video. “We don’t know if they’re rubber bullets or live rounds, but the safety’s are definitely off.”  Behind him, smoke billowed out from what Michelin called a “war zone.” 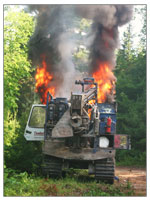 Midway through the dramatic unfolding of Thursday’s clash between the RCMP and anti-fracking protesters, multiple explosions had been reported at the blockade site.

Tensions had escalated since RCMP officers moved on the blockade early Thursday morning.  APTN’s Ossie Michilin reported one RCMP officer as shouting “This is Crown land, it belongs to the government, not to you f—ing Natives!”

The comment drew swelling ire from the already tense crowd, which received a dose of pepper spray upon pressing too close to police lines.  The situation escalated until the otherwise sleepy village of Rexton, New Brunswick was suddenly and uncharacteristically plunged into a full-blown conflict bearing resemblance to a scene from the Gaza Strip.

At the centre of the conflict is the Houston-based shale gas exploration company Southwestern Energy (NYSE:SWN), whose natural gas exploration proceeded against the consent of the land’s residents, and even against the tacit approval of the provincial government.

To protest SWN’s activities, a coalition of First Nations people as well as non-indigenous residents have been blocking the company’s access to its nearby hydraulic fracturing equipment since September 30th, taking their stand on New Brunswick’s highway 11, route 134.

Hydraulic fracturing, or “fracking” is a process that involves injecting millions of litres of high-pressure water and highly toxic chemical lubricants into the ground, forcing the release of natural gas from ruptures deep below the surface. The practice has been associated with a high risk of groundwater contamination, air contamination, land contamination, severe enough in some cases to drive people out of their homes to escape the pollution.

Ruling in favour of the industry, an injunction was issued by the Moncton Court of the Queen’s Bench on Wednesday afternoon. The order commands the dispersal of any people or objects blocking SWN from access to the equipment at its drilling sites, and authorizes any peace officer to arrest, remove and remand anyone who is contravening the order.  Police in full riot gear bearing non-lethal munitions arrived to enforce the injunction the following morning. It remains in effect.

While the disputed land officially belongs to the crown, First Nations Chief Arren Sock has asserted the Crown has failed to live up to the responsible management conditions outlined in treaty agreements between Canada’s indigenous people and the Crown.  On these grounds, Sock declared the treaty in abeyance, and promptly organized a grassroots assertion of autonomy, serving SWN with an eviction notice on October 1st. 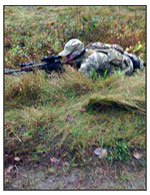 RCMP spokeswoman Const. Jullie Rogers-Marsh confirmed reports that Chief Arren Sock was arrested at the site, along with several of his councilors. The RCMP denies rumors that live rounds had been fired, stating that “no military elements” were involved in the incident, and that only non-lethal munitions were deployed.

Yet, on the enforcement side were a few men in camouflage gear, armed with long-barrel, military-style rifles.  It remains unclear what regulatory authority deployed these individuals.

Voices on both sides of the issue could be heard laying blame for the collision between police and protesters, while others we calling for an immediate return to peaceful diplomacy. By late Thursday evening, much of the tension had dispersed; only a handful of RCMP remain in the area.  No serious injuries have been reported.

Not the outcome New Brunswick was hoping for.

Big promises come with big expectations.  Since his election in 2010, Alward has faced mounting pressure from both the proprietors and the detractors of hydraulic fracturing in the province. Southwestern Energy’s operations in southeastern Canada are staffed primarily by U.S. Citizens, not New Brunswick residents, and the company has violated the permit process required to perform seismic testing on more than one occasion.

This has led to criticism against the premier for failing to involve the public in shale gas decision-making; for failing to leverage new jobs from a new industry, and for allowing provincial authority to become displaced by a foreign corporation.

Critics argue that not only is Alward unaccountable to New Brunswick residents, but Southwestern Energy is apparently unaccountable to Alward’s provincial government.  Land sovereignty is an issue appearing on the tables of the province’s indigenous and non-indigenous people alike.

“We operate with the greatest respect for landowners and surrounding communities. […] We have a strong history of being a responsible partner and respectful neighbour. That includes taking responsibility for any unlikely damage that may result from our activity.”

The company has been linked to at least 5 drinking water contamination incidents, and was named in a 2010 class action lawsuit in Pennsylvania for its role in the destruction of residential water tables near its well sites.  The company has been fined numerous times for drilling without a permit.