Forget the Stars and Stripes and July 4th.

This week, it was all about the Maple Leaf and ubiquitous red and white colors that adorned the great country of Canada.

From the small quaint country towns in the heart of the Legendary Rockies, right through to the hustle and bustle of the larger metropolis’s like Vancouver, Calgary and Toronto, these cities and suburbs were a riot of colour and just bursting at the seams with Canadian Pride.

Of course, July 1st is a date flagged and firmly etched in every Canadians diary and psyche. The national holiday, aptly called “Canada Day” is marked by a series of national events and festivities to highlight this historic moment. 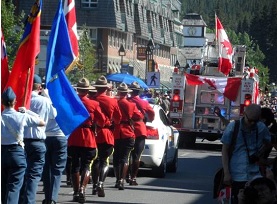 This holiday for those travellers passing through Canada, who may have been caught up in the celebratory chaos and who were lucky enough to encounter this national holiday, would have been exposed to a riot of festivity and colour. The day marks Canada’s 146th Birthday. It was back on July 1st 1867 that Canada became a Kingdom of its own right

I was one of those lucky folk celebrating and enjoying this holiday in the town of Banff, amidst the majestic Rocky Mountains.

This was one of the first street parades I was taking in and what a show and festive atmosphere, the town of Banff put on. Despite being affected a week prior by devastating floods that swept through many of the communities, Banff was certainly not going to let the floods dampen the spirit that runs through these mountains.

“What an example they set. When the floods forced so many from their homes, communities dug deep, neighbours helped neighbours, and people sheltered complete strangers. That’s the spirit that makes Canada the best country in the world. The best bar none.” 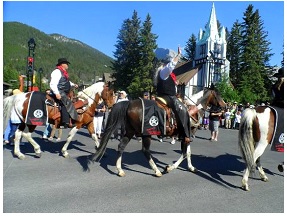 This was certainly true, as Pillar to post, flags abound, shop windows exuding Canadiana at its best and local towns folk and tourists out in full force donning red and white maple Leaf emblazoned apparel, took to the streets to celebrate, unite and overcome the disastrous events that beset these picturesque mountain communities.

The 1.5 hr long street parade, marched its way down Banff Avenue to cheering crowds & waving flags. The parade, made up of local bands, clubs & cultural societies, local businesses, street performers and visiting bands from Calgary dazzled the onlookers. From clowns & Bear costumes, to Calgary Stampede horse parades, RCMP in full regalia, to quirky and colourful floats and dance performances by the Chinese and Ukrainian communities, Banff had it all. The day’s festivities came to a close in Central Park with entertainment by The Dino Martinis band on the Stampede Stage and fireworks to ring the day to a close.

Alberta and the town of Banff, certainly knows how to put on a show and what a privilege to witness such Canadian Spirit in the heart of the Rockies.