While it is not the first time a National Anthem has been chopped to bits at a sporting event Alexis Normand’s rendition of “The Star Spangled Banner” at the Memorial Cup game on Saturday has non the less caused quite a stir.

This past weekends classic by the Saskatoon-based French-Canadian singer who usually sings in French is receiving it’s fair share of criticism, and rightly so.

Normand, started the anthem well, but quickly stumbled and seemed lost shortly into the song. The pressure may have been a little more than she could handle as she proceeded go silent and then hum her way through many of the lyrics before picking back up in the late stages thanks in large part to some much needed help from the crowd.

“I’m embarrassed and deeply sorry. I wish I’d had more time to learn the American anthem,” she said on Twitter in an apology following her performance. “Thanks so much for the crowd’s help!”

Many of the players were caught on camera laughing at her unfortunate performance and in the days following the mishap she has been riddled with shots from all angles.

“No doubt it’s been a rough 24 hrs! Thanks to everyone who has sent supportive messages!” she Tweeted later. “I also empathize with victims of cyber-bullying.”

The harassment she has received since the video came out online has been tough from the online community but most of the American media has been relatively easy, it seem they understand that she must feel bad enough already.

There is little doubt that this will be the last occurrence of a countries pride being kicked in the teeth by an ill prepared or just plain horrible singer (not that she falls into the later category), so I wouldn’t worry too much about it Alexis, It’ll blow over soon enough. 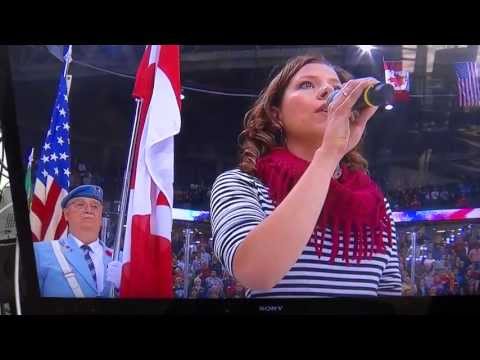