TORONTO – Toronto played host to the largest DJ competition on Earth last week as the Red Bull Thre3Style World Finals hit the city for the first time.  From November 4-9, the 17 top DJs from around the globe gathered to showcase their talent for roaring crowds of thousands and a judging panel of DJ heavyweights, including DJ Jazzy Jeff, Kid Koala, Skratch Bastid, Grandtheft and Jess Jubilee.  After five nights of heated competition and wall-shaking performances in sold-out venues across the city, it was DJ Shintaro of Japan, a Wildcard selection on the competition’s final day, who reigned supreme as this year’s Red Bull Thre3Style 2013 World Champion.

“This win means so much,” Shintaro reflects, “I think it will help to grow my DJ career and will allow me to really show the world what Japanese DJ culture is all about”. 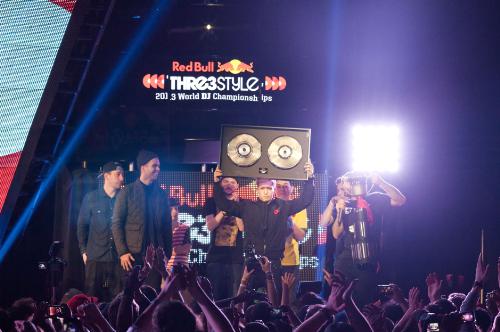 This week featured daily and nightly events fit to satisfy all musical tastes, including panel conferences led by some of the most influential faces in the music industry and nightly DJ competitions and headliner performances in some of the city’s hottest venues. It all came down to the final World Championship competition on Saturday, November 9, where Trentino (USA), Byte (Chile), Eskei83 (Germany) and Marquinhos Espinosa (Brazil), plus two Wildcard competitors Bazooka (Switzerland) and Shintaro (Japan), battled it out for ultimate sonic supremacy.

As with every night this week, each competitor was given a precious 15 minutes to perform a set mixing at least three genres of music. Untouchable and forward thinking with a truly unique sound, it was Shintaro of Japan who clinched the win in his unexpected return to the battle.

Hailing from the Japanese city of Akita, Shintaro made Red Bull Thre3style history at The Kool House, Toronto as both the youngest ever winner and the first Red Bull Thre3style World Champion residing outside of the competition’s host country. 2013 was definitely ‘third time lucky’ after striving for the title in previous years with all the hard work finally paying off in front of over 2000 concert goers.