After practice at the MasterCard Centre Maple Leafs defenceman Mike Komisarek met with the media to discuss Monday’s emergency eye treatment.  “Shooting some pucks after practice, missed the net a few times and took it out on my stick,” He said. “Next thing you know, stick breaks and a bunch of graphite goes in my eye and my face. Had to go see the eye specialist. Had to have it removed and have a stitch in the eyeball. Mark that down as a first for me. Something I don’t want to do again.”

The eye is apparently not going to be a problem for Komisarek going forward as he has been cleared to play Thursday at home against the Washington Capitals.  It is not clear yet if Leafs coach Randy Carlyle will dress Komisarek for Thursdays contest as he should be hesitant at removing one of  Mark Fraser or Cody Franson from the line up.

Komisarek did have some parting words on Wednesday

“At the end of the day, don’t take it out on your stick and try to hit the net. Not the stick’s fault.”

Words to live by. 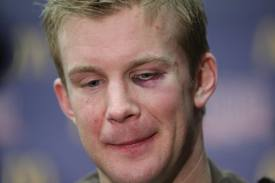