Toronto Maple Leafs forward Joffrey Lupul had a phone hearing with the league Thursday afternoon for his hit on Tampa Bay’s Victor Hedman.    The NHL announced Thursday following the hearing that Lupul will be suspended two games.

The incident in question took place in the third period of Toronto’s win on Wednesday over the Lightning.  Lupul hit Hedman’s head with his shoulder while appearing to leave his skates, leaving the six-foot-six Swede looking dazed.  Hedman left the ice but fortunately for the Lightning he returned later in the period.

Lupul was given a two-minute minor penalty for an illegal check to the head. 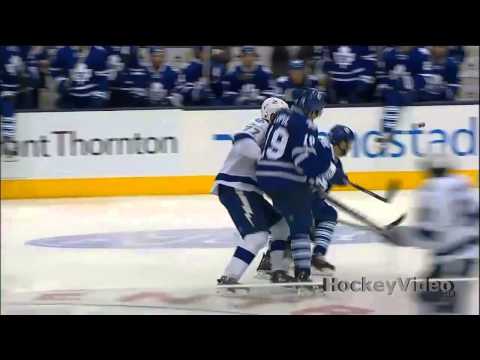 “By no means did I go after him and try and hit him in the head,” Lupul said after the game.

Lupul had a goal and an assist in the game and in two contests since returning from a broken arm, the 29-year-old has three goals and an assist.

Wednesday’s win snapped a five-game losing streak for the Leafs.

With defenceman Mike Komisarek clearing waivers Thursday, the Leafs have recalled forward Ryan Hamilton from the American Hockey League’s Toronto Marlies.  Hamilton is with the Leafs in Buffalo and is expected to be in the line-up Thursday night as the Leafs visit the Buffalo Sabres, Toronto is looking for their second win in a row.