In case anybody reading this article has been living under a rock for the last several months, it is clear that NBA fans have been pre-occupied with the Golden State Warriors and their quest to outpace the 72-10 record of the 1995-1996 Chicago Bulls. The Warriors have sucked up the attention of the entire basketball world as they embark on their quest to have the most successful regular season in NBA History.

As a result, there has been little attention paid to the fact that the 2015-2016 Toronto Raptors are poised to have their best season in franchise history. At the rate the season is going, their winning percentage stands at around .682., this mark would smash their franchise best winning percentage of .598 set during the 2014-2015 regular season.

In addition, the Toronto Raptors are within striking distance of their first 50-win season in franchise history. This team (at the time of writing) would only have to go a measly 3-11 in the final 14 games to achieve such a milestone. I think it is safe to say that this spirited bunch will surpass that mark emphatically. 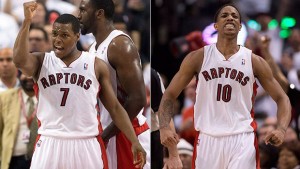 Kyle Lowry’s offseason transformation of his physical body has translated into a career high in terms of points per game (21.3) and 3-point field goal percentage (39.3%). Similarly, Demar Derozan is also in the midst of his best season of his professional career with a career high of 23.8 ppg.

However, the Toronto Raptors have a serious deficit in terms of recognition around the league. In spite of their tremendous season, it seems that most basketball analysts has concluded that the Cleveland Cavaliers winning the Eastern Conference for the second year in a row is a fore gone conclusion. As a result, the rest of the Eastern Conference (and thus the Raptors) are drowning in a deep sea of irrelevancy.

The lack of faith in the Toronto Raptors can also be seen in the form of local fan blogs. For example, a blogger from RaptorsHQ.com fussed about the heavy amount of minutes played by Kyle Lowry and Demar Derozan and predicted that the Raptors would be exiting in the first round of the playoffs yet again.

Maybe it’s time the city and the country took a chance on a team again, kind of the way they fell in love with the Blue Jays in the second half of last season.  If nothing else, the ride could be fun.