With the February 18th season four premiere of HISTORY channel’s Vikings drawing near, the channel has announced a familiar face and heavy-hitter will play a guest starring role. Newly crowned 2015 American League MVP, and Toronto Blue Jays third baseman Josh Donaldson is making the trek to Ireland to film an episode of Vikings where he will have a speaking role.  A massive fan of the Canadian-Irish drama, Donaldson (who is no stranger to off the wall hair doo’s) recently Tweeted a photo unveiling a striking, new Viking-esque hairstyle inspired by the shows lead character, Ragnar.

The two-time All-Star Donaldson will take on the role of Hoskuld, a Viking warrior of amazing skill, in an episode that will air later this year. 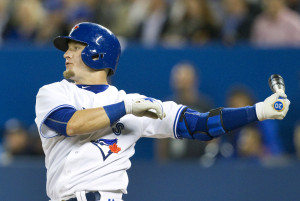 In the upcoming season of, betrayal is running rampant as power begins to shift. Following the Vikings’ successful raid of Paris last season, Ragnar is the most feared and respected leader in the Western World. However, his victory is short-lived as he is surrounded by those who would love nothing more that to see his undoing.